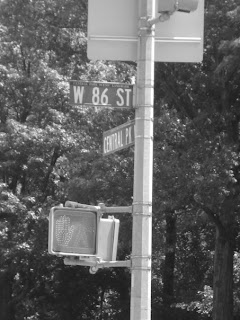 I awoke the next morning so excited I could not control myself. Today we were moving out of this dump and into a decent hotel! It was 10am and I did not care that check in was only 3pm; I wanted to go there now! But alas that was not possible, so instead I settled for a hearty smoked salmon and cream cheese bagel from a local deli, a coffee from Dunkin' Doughnuts, before checking out of our slum.

Bags back on our backs, we decided to head to the new hotel again, we have no shame, and leave our bags there for the day until we checked in. This was obviously no problem, and we then headed out into Midtown ready to explore the streets.

Unlike with every other town that we had visited, in we did not use the Lonely Planet Guide; we did not walk around with a map (ok a couple of times, but only for reference). In we were not tourists, at least we did not feel like tourists. In we were home. It is very hard to explain, especially as for the Israeli, this was his first time in the States ‘period’ and for me, well last time I was in New York it was for a minimal amount of time and while there I chose to close my eyes and let my hostess lead me around the city. This time around we were leading ourselves in the only way we knew how… getting lost, getting found and realising that using a Starbucks or Dunking Doughnuts as a point of reference is not going to help you find your way.

Regardless, we had a vague idea of where our hotel was in relation to a few major landmarks, so off we headed down the road, past Grand Central Station (we’ll get to that in a few days), in the shadow of the Chrysler building, past the Empire State Building and on to Time Square. I remember going to Time Square in the winter, in the snow and watching the bright lights, made all the brighter in the snow seemed so magical. Here on a hot summer’s day, with an overcast sky and the heat of the streets steaming up all around us, the view was totally different. I suddenly looked at Time Square from the perspective of a local, and I had the urge to wipe at my arms and legs to swipe the tourists away from me. It reminded me of the promenade in Tel Aviv mid-August when all the French tourists are in town… I avoid the promenade in Tel-Aviv during the whole of August. In fact I avoid that area from the end of June, July, and August and maybe will venture back around the end of September… maybe.

But this was different. This was not my home, I was one of the tourists, so as much as I felt a little overwhelmed by the number of people swarming around me, I could not be mad at it… I was one of them. We spent the rest of the day visiting my office, buying a Nintendo Wii, checking out the shops and getting used to the city. And we walked. Lord did we walk!

Eventually we returned to our new hotel, The Eastgate Tower Suites. In our room, which was pretty much the size of a studio apartment, with its own kitchen, dining area, sofas and chairs, walk in wardrobe and bathroom, we unpacked our belongings into our home for the week and could not help but feel like it was our home for good. And as we lay on our giant bed and surveyed the space around us and the clothes hanging in our closet we smiled contently for we saw that it was good.

Posted by channahboo at 8:19 am