An "I Heart New York" Weekend

By the weekend we were so at home in and had done pretty much all the shopping we had planned to do. We were looking forward to a relaxing weekend with friends. First we began with Friday night dinner on the . We arrived early to help. It’s also a ploy of mine when I know I am going to a dinner where I know only the hostess so that it gives me a chance to spend time with her first and also to make myself at home enough that when the other guests arrive I look like part of the furniture. I hate awkward entrances.

I have to admit that once I knew how many people were going to be attending the soirée I gulped with nervousness, but once we sat among the other guest and were immediately pulled into a heated discussion about how to stop terrorists from being terrorists, we immediately relaxed and began to enjoy ourselves. After 3 courses of truly delicious food, and enough red wine that I was beginning to feel sleepy we decided say our thank yous and goodbyes and make a speedy exit before the Charadi guys started on their 3rd Devar Torah.

The next day we met up for brunch with a friend and her husband in the . Now this was my kind of meal. A meal with eggs, amazing company and three free alcoholic drinks! Now thinking about it, after not seeing my friend for three years, a drunken brunch was probably the best way to reconnect. We sat chatting like we had all known each other forever and when I told her how we had lined up at Magnolia the day before she insisted that we go across the road to her favourite bakery so she could show me where I went wrong. We were really in no rush though and it took the waitress giving us free coupons to “continue our 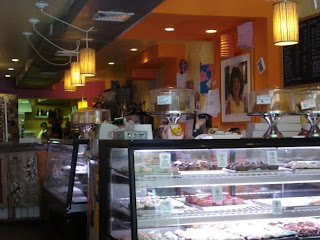 conversation at the bar” before we took the hint and decided to stumble out of the restaurant and into the bakery across the road. The place was called Sweet Sugar Sunshine and when I tell you that it pooped on Magnolia, I mean that it totally ripped it apart, kicked it to the ground, stomped on its face and pooped on it… who would have thought cupcakes could turn so nasty. All I am saying is if you every happen to be on the corner of Rivington and Essex then you should go and get the Spicy Pumpkin cupcake… that’s all I have to say.

After walking around the area, checking out the local stores and working off some of the brunch we had had, we decided to head back to the hotel to hang out in more comfortable surroundings. We had plans for the night and our friends just wanted to come check out the place… that was at around 3pm. Over 6 hours later we were all still hanging out at the hotel… starving!

A dinner of burgers quelled our hunger and we spent the rest of the evening chatting life and discussing our plans for and . We would be sad to leave , but our day had led to an invite for next weekend in and we were so looking forward to another perfect week ahead.

Posted by channahboo at 2:35 pm