So I was struggling to decide what I was going to wear for Purim. Being someone who hates dressing up, and hates costumes, all I wanted to do was go to a bar in my jeans and comfy shoes and dress down… as usual. However, everyone was talking about what they were wearing and where they were buying their costumes from, which made me feel somewhat out of the loop. It was then that I suddenly realised that I have never experienced Purim in Israel before! Can you believe it! I am a girl that has been in and out (insert whatever jokes you want) of Israel a million times throughout her life, spent a year here in-between school and university, and have lived here for almost two years and have as yet to experience Purim.

Purim is a time that is revelled and enjoyed by everyone in Israel. Regardless of religious level, people don their costumes, go out on the streets and join in the festivities. How had I, someone who loves a party, missed out on all this? So I decided that despite having a month from hell, I was going to let my hair down and have some serious fun! But what to wear?

My initial thought was to go for the cowboy theme, which was pretty much every other person's idea. And then the idea came to me "MILK". Not only is it my favourite word (you say it out-loud a couple of hundred times and you will understand why), but the word 'milk' also resonates as another word for nurturing… 'Mother's milk'. After my emotional month I decided that some nurturing was 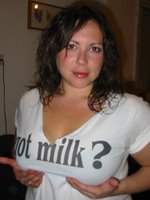 required. Plus when you think of milk, being in Israel, you cannot help but think about "The land of Milk and Honey". So as I sat on msn, chatting to my friends I looked to my right and noticed the picture on my MSN and decided that 'got milk' would be the perfect way to stamp a big closure sign on a month of misery and say "hello boys" to a fun loving lead up to Summer!

So I would like to say a big thank you to all of you who came to Moulan in Jerusalem on Tuesday night and helped me experience my first Purim in The land of Milk and Honey! It was a great night had by all who were in the right spirit to drink and be merry… and my favourite… dance our ASSES off!

Take a look at this site for more pictures of the evening (oh I even got in a couple)!
Posted by channahboo at 5:03 pm

Did you hook up with those cowboys?

I've often wondered whether a parent or, in this case, sibling would be proud of seeing a family member on Page 3.

Though a little softer (maybe Daily Express rather than The Sun) I can honestly say, I don't know who this person is claiming to be my sister!!!

Ahh yes. I remember this night vaguely, you were looking like such the purim harlot! But boy, did you wear that shirt well!!!

are you forgetting 2 day purim Israel 1998 (kibbutz followed by Jlem), Wow Chans your memory is lacking!!!!!

Thanks people for the messages...

Anon: They were gay cowboys, so I believe they were pretty much hooking up with eachother all night.

ginrod: I think that by the end of the night it was more like the T-shirt was wearing me! You were looking ever the wanton harlot too as I recal ;)

I think you are forgetting that I was not in Israel over Purim that year... remember every cool party that happened on our year out I was either MIA, sick, or out of the country... in the case of Purim i was in a field in London with Stephen Paul getting drunk!

So whose memory is playing tricks on them now?? :)

ha ha! too true...dont think this years costume would have gone down well at the all girls sem party in jlem....

True! Although we ended up getting chucked out anyway! ;)

Datingmaster, Jerusalem said...
This comment has been removed by a blog administrator.
3:02 pm

u r one hot mama

cutie pie and a half said...

this is my sister shouldn't i be so proud!?