Three is the Magic Number

Sometimes when you least expect it, life can turn around… and surprise you.
And sometimes when you least expect it, life can turn around… and bite you in the ass!
I want to share with you a slightly humorous story that happened to me last week. After being unofficially single for a little while and officially single for a long time, I had pretty much decided that until prince charming came riding on his white stallion (could this be any further from what I am looking for!) I was going to remain single just to annoy my family. Of course, everyone has needs/ desires/ urges, but you see I had transcended the need for a man (see the post below)… perhaps living with Nooman had finally put me off men altogether… I don't know. Actually, now that I come to think of it, I don't think it was Nooman that put me off men (only teasing ya baby) I think it was more the idea of the men available here… here being Israel!

Unlike SOME (some being one - hello Ms. Freeman!) of my Anglo girlfriends, I was never anti the idea of dating an Israeli guy. On the contrary I thought that finding an Israeli partner was not only beneficial to ones integration into Israeli society, but also a must for Ulpan no hopers such as myself who want to find another way to learn the language. So when I did finally start dating Israeli guys in Tel Aviv I was pretty disappointed to realize that Israeli men in general are the epitome of all that is bad about Israel. In short, they are rude, uneducated, sleazy, arrogant, aggressive, and disrespectful. Of course I am generalizing… I have been out with one or two Israeli guys who weren't that bad… hmmmm trying to remember their names… it is a tough one.

The first Israeli man was a guy called Amir. Amir was half Italian, half Israeli, a lethal combination! Anyway, after a few weeks of back and forth, Amir showed his true colours and I showed Amir the door (ok it was his front door, but I walked out and did not come back!).

The second guy was called Elad. Elad was actually a lot of fun for a while. He was first generation Israeli, so initially his European roots came shining through. We would stay up all night talking and giggling. He had a great sense of humour, fun personality; he even successfully extended my Hebrew vocabulary by a couple of words… I'll leave what those words were to your imaginations. It was going so well, until the Israeli in him came out full force and this time it was most definitely I who showed him the door… my door!

So after two bad Israeli men experiences I had pretty much decided that I was going to lay low for a while and just enjoy being single for a while, continue to obsess over my "lust good friend", and concentrate on the other more important things in my life… I forget what they are right now…

Then, two weeks ago, life came up and surprised me. I was getting myself my 9.30am, latte macchiato from Arcafe. It is my morning ritual. I go into work at 7.30am; force myself to work for a couple of hours on nothing more than water before it all gets too much for me and I have to get me some caffeine. So I walk downstairs to the Arcafe under my building and order my large Macchiato and chocolate croissant. On this particular day, the hot water for some reason was not, and my hair was greasy and I was feeling very tired, grouchy and grey around the eyes. This was certainly not the moment in my life that I expected to meet someone… I didn't even want to speak to anyone!

So I was trying to explain to the pre-pubescent looking waiter that I wanted my croissant to arrive warm at the same time as my coffee, as opposed to getting it 5 minutes before so that by the time I get my coffee it has gone cold and hard, when a voice spoke to me over my shoulder. The guy was kinda cute, not striking, but totally cute. He smiled, said something in Hebrew and then laughed and said, "I think it is too early in the morning for you to understand my Hebrew." While we waited for our coffees he and I chatted, exchanged msn addresses and I decided that maybe not all Israeli men were as bad as Amir and Elad. His name was Adi (everyone in Israel seems to be called Adi – but that is another blog).

On the way back up to the office I was feeling pretty good about myself, when a friend called and asked if I would like to be set up with a friend of hers. I thought why not, so I told her to give him my msn address (it is the new phone number!) and I spent the rest of the day talking to a really great guy called Avi.

Avi/ Adi/ Avi/ Adi… yes it was getting very confusing, but it was nice to have two guys fawning over me… well as opposed to none. It was not an easy thing. I mean Avi was a lovely guy, perfect on paper, perfect English, same taste in music as me, and we just seemed to get on so well. The only problem with Avi was there was no attraction there, well not on my part anyway. Adi also was a nice guy with a great sense of humour, good job, interesting life and most importantly a 4x4! So I was not willing to make a definite decision yet on either of them… and remember there are two guys here FAWNING over me!

Anyway, it reached a point when I had to make a decision, for my own sanity! It was just getting too confusing dating two guys with very similar names. I would be speaking to both every night. When anyone asked who I was talking to I had to look at my phone to check the name of the person I was talking to! It was getting a little out of control, especially when I unknowingly arranged to go on a date with them both on the same night! Thankfully, Israeli's don't generally make fixed arrangements until the last minute so I was not expecting a call until 20 minutes before we went out. There I was on a Thursday night, sat watching TV with Nooman, waiting for one of 2 men to call, when I heard the beep of an incoming text message…. It was……….. ELAD?!!?!?!?!?!?!?!!?!?!?

I couldn't believe it! How typical! I am waiting for one of two great guys to call, and then an ex has to rear his ugly head!
Life had just come up and bit me in the ass!

But they do say that 3 is the Magic Number ;) 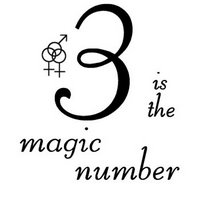 Posted by channahboo at 5:42 pm

elif said...
This comment has been removed by a blog administrator.
12:58 pm