Israel At It's Best

There are many things that baffle me about Israel. Mostly I would have to say that the things that baffle me most about Israel would have revolved around driving. It will come as no surprise to you people who have come to Israel at any point that making the decision to go anywhere near a road is pretty much making the decision to put your life in jeopardy. More people die on Israel's roads each year than in terrorist attacks, so then why Israel more famous for it's terrorist activities rather than it's dangerous roads... and let me make this clear... the dangerous drivers it holds. When I was learning to drive in England, my father would take me practising on the roads. This would be followed with the usual argument where he would shout at me for making some small error like turning left instead of right, and I would end up stomping out of the car into the house swearing I would never learn to drive with my father again! However, one thing my father would always say was that he was more concerned about the other drivers on the road as opposed to me. I guess he was trying to make me feel better about my own driving skills, which by the way are pretty damn good! Here in Israel his words could not hold more true! I find here that I am watching the other drivers around me more than I am thinking about the direction that I am driving. At any point some shmuck in a banged up white Subaru driving at 200 km per hour on an 80 km road could try and cut in front of you taking with it your front bumper and headlights.

I think my point can be made best when you look at the following website http://www.asirt.org/roadwise.htm that states:
In Israel, drivers often
• drive aggressively and honk their horns frequently
• speed, pass illegally, make careless lane changes, or tailgate
• fail to obey traffic signals and road signs

The choice here is either not to drive and rely on the buses, drive yourself, or walk. I am personally less afraid of the bus I get to work every morning blowing up, and more concerned that it is going to flip over as the driver speeds around corners and cuts up traffic on the motorway to get me to work on time. Nevertheless it takes preference over driving. It is not like in England, where I would drive to work early each morning, still feeling a little sleepy, but relying on the fact that the other drivers around me would be driving at a sensible speed and taking care not to crash into anything. In Israel, the roads resemble something more like a dodgem ride at the fair. You have to constantly have your wits about you in order not to 'crash into' another car that barely noticed your car as it swerved across 3 lanes to get to the exit it didn't want in the first place!

So my point is…. In this country filled with bad drivers and a rising death toll from road accidents, what is it that the Israeli police force is doing to rectify the situation?
YELLOW JACKETS!!! 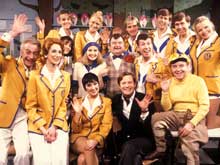 Yes… you read correct. Since January 1, 2006 it is now the law that every car must have a yellow jacket visible inside the car. I stress the word visible as it is not enough to have the eyesore in your boot along with your spare tire and other breakdown essentials. No according to Israeli law, it has to be visible so that when the police drive past you they can see the yellow jacket flashing brightly in your car and know not to fine you. So as opposed to fining bad drivers, the Israeli police see it of a greater issue that we all look like fools and wear yellow jackets when driving!

Now while I am writing this I understand that Israel is not the only country who has decided to implement this law. Belgium and other countries in Europe are also getting on the Yellow Jacket bandwagon. Pretty soon all drivers around the world will resemble the cast from Hi-de-Hi!! I'd like to see Jeremy Clarkson's view on that one! Here is hoping that England will not be stupid enough to follow yellow suit.

What is the purpose of the yellow jacket?

Well, although my first response was "fuck if I know", the truth is the idea behind the yellow jacket is actually very clever. It is for when you break down or crash on a road, so that other drivers can see you and not nock you over… it is a life saving device. My issue is that in a country where the drivers barely notice other cars on the road, what makes the authorities think that they are more likely to notice a pedestrian in a yellow jacket? Perhaps we should be taking the yellow fever one step further and just have all cars painted illumines yellow in the hope that more Israeli drivers will notice other vehicles on the road!

Posted by channahboo at 2:26 pm

So on this subject of driving ever wonder what the situ is with hard shoulders in this country???they are either non existent or so narrow only a motor bike or a little person in a yellow jacket can fit in them??? Suppose they know that israeli drivers will just use them as another means of overtaking...:)

Good job (at the ripe old age of 26) I'm finally learning to drive in the UK then...

At least that way I don't have to be a fashion victim as well as committing granny-cide the first time I try to reverse park!

And they say it's not safe in Israel - WATCH OUT FINCHLEY!