So as I have not been in the office since Thursday (I was sent on a riveting conference in Jerusalem) and Nooman's computer decided to have a meltdown consisting of over 9000 viruses, this is the first chance I have had to let you know about my disappearing act over the weekend.

On the Road to Nowhere

I realized that I have not been on a holiday for a long time; I do not count my trip to England in June as this was less a holiday and more like a shopping exertion. So while I whinged about my lack of break and lack of holiday days to take a proper break, my friend Joel took pity on me and decided that a weekend up North is what was required.

It is such a relief when someone else is happy to make the arrangements, find the location, book the hotel/ Zimmer, and arrange the food! In fact there was pretty much nothing I had to think about other than what clothes I was going to wear and remembering to pack my toothbrush. 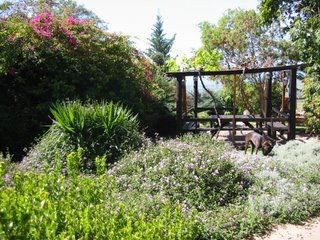 Just above the Kinerret is a beautiful Moshav called Had Nes (not to be confused with Loch Nes which is in Jerusalem). This 'Little Miracle' is a getaway location for those of us who live in the city and want to remember what nature looks like. The houses are log cabins, fully furnished with cable TV, DVD players, and a two person Jacuzzi bath.

We arrived around 9pm Thursday night to find that the little log cabin we had seen on the internet was in fact better than we thought it would be! It was a haven hidden behind trees and bushes covered in the sweetest smelling pink flowers. We stood and looked at the place we would call home for the next 2 days and breathed in the freshest air we had smelt since we landed in Israel. After unpacking the car, Joel and Susi set about making dinner, while I opened a bottle of wine and began my weekend's mission of relaxation! Lucky also was settling in, meeting the local dogs and inviting them back to our cabin for food and rest. Our cabin was soon the centre of the dog community in Had Nes… well Lucky is a very pretty dog, and apparently the only bitch in the moshav. Dinner eaten and a bottle and a half of wine later, I decided that it was time to check out the Jacuzzi. Top tip, never stay in a Jacuzzi bath longer that 15 minutes, even after you have turned the bubbles off, it messes with your mind! So feeling totally cloudy and barely able to stand up straight I threw myself into bed and slept soundly until morning.

Birds up North are very noisy! Or perhaps it is that there are actually birds living up north as opposed to the bats that fly around Tel Aviv. At 6am, as the early bird catches the worm, the early bird also makes a blummin' racket! But as I was beginning to think that perhaps I had had a little too much of nature, I begin to appreciate the sounds… the smells, everything that is different to the hustle and bustle of Tel Aviv. I mean given the choice of being woken up to a rubbish truck or a swarm of birds, I chose the birds every time!

So in keeping with a weekend of nature, Susi and I decided to take advantage of the horse riding tiyul. While Susi was brought up in Oklahoma and used to horse riding, I have always lived in the city or the suburbs so this was a little out of my league, but I was determined not to be a 'city girl' and to enjoy the best of the outdoors. Trekking through the fields around the moshav I grew more and more relaxed, even when my horse decided to follow Susi's into a trot. My horse was aptly named Whisky, so throughout the trek my only words were "Whoa whoa whoa Whisky!"

Feet firmly back on land, Hugh turned up to find Susi and I dismounting the horses and walking very cowboy like back to the cabin talking about drinking more wine.

The evening was spent eating, drinking more wine and beer and chilling out on our porch. We talked about life, love and actively pursued getting our minds and bodies into a deep state of relaxation. Susi tried to teach me a few words in Thai, but the most I managed to remember was the word for doing homework… "Tam ganban", which is a double-entendre for getting it on… as in "you two 'doing homework' ;)"

But this was not a weekend for 'doing homework', despite the fact that the Jacuzzi was for two, and the location was seriously romantic! Admittedly I did fantasize about being there with the LGF, but it was good that we had a weekend apart, and better that it stay just a fantasy. In fact next time I go, I think it should be with the 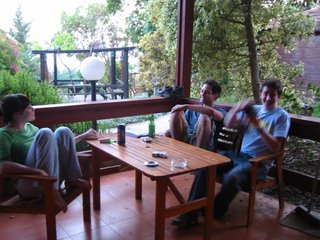 Next time we go we're going to get more than one cabin, so start putting down your names for the next trip!

For the record, i have a quality collection.

Seriously Nooman! I get the feeling that you only read the first paragraph of my blogs, or just skim ready up to the bit about you!

Now everyone will think that you are just self-absorbed ;)

this nooman charachter seems like a right twat (dill).

in reply to the above comment - anyone who leaves a mesage and as an 'anonymous' is a total loser. Shows your too pussy to stand by your comment.

a loser.... who doesnt identify themselves.....

is it Jeru Guru?

can't be the jeru guru,
we all know his taste in pussy.

Steady on Nooman. Why on earth would I post anonymously?

Jeru 'loser' Guru - are you so dumb that you dont realise that by using a pseudonym, and thereby hiding your identity you are the same as writing from 'Anonymous'.

such a chilled title and such unchilled readers

I am the original anonymous and I would like to add that I think Jeru Geru is gay...

I agree with anonymous. You are a complete twat.

Can we not just all love eachother?

No we cant all be friends.

And by Jeru Guru's constant updating, it supports my theory that Jeru Guru is an annoying geek who is probably unemployed who has nothing better to do then sit on his computor all day and make up an alter-ego he wishes he had.

and before you reply something stupid - i sit at a computor all day because i am a lawyer. Its a pain of the job.

So whats your excuse?

Wow did you dream up that theory all by yourself? Maybe you can follow that up by telling us who killed JFK and what really happened to Lady Di.

Gee, you must be the only person in the whole world who spends his/her day at a desk in front of a computer.

It is because of my work, Sherlock, that I sit in front of a computer, not because I am unemployed.

Word of advice champ - No one cares for your inferiority complex so lighten up a bit and after you do that, learn how to spell.

Whoa MoMa!!! First of all. We all know Nooman IS Jeru Geru and arguing with himself.

Second of all. The North is the best place to rest our toes. It will be our new requirment for a breather.(which is required every weekend)..so start dating someone from up there.

thirdly- can't we all just get along? let Hashem be our guiding light and fance in a happy circle with him as our guide?
xoxoxo

Ginrod, I think the original (very intelligent, very colorful) anonymous was trying to say the Nooman and Jeru Guru like to dance in a circle of their own... on their own... together... forever...

Neither of the fine young boys have bothered to respond to this theory and I believe our wholly Talmud Bavli (which they can take into the dance circle with them) teaches us that silence is viewed as admission...

What you saying nooman? Whats wrong with being an unemployed annoying geek who spend his day infront of his computer?

"silence is viewed as admission..."
Skotch I think you are on to something! Let us not hide in Silence! Our revelation revolution must begin Achshav! Join me, in the spirit of outing people! We must stand up..stand proud- we may not be Goonies, but we're good enough!

I see things just got a little out of hand... Time to head up North again me thinks...