No Phish were harmed... 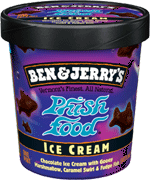 Every time I walk passed the freezer section in my supermarket, or any mini market, in fact anywhere that bares the Ben & Jerry's logo, I search for the flavour to end all flavours... the King of all that is heavenly in ice-cream form... Phish Food!


For those of you out there who led a deprived childhood, or just did not experience life during their university years, you might be led to believe that Phish Food actually contains Fish… and if you did, you would be stupid, but tragically not alone… Yes I have met many people who have believed the same, and I put it to you, who other than a severely hormonal and pregnant woman would even consider feeding a craving for fish and ice-cream in such a vile combination? Certainly not Ben and Jerry… no no no! I mean just take a look at the two men below… you think they would ever invent an ice-cream with fish in it? Look carefully… 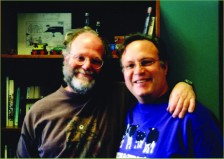 These sweet men are Ben Cohen and Jerry Greenfield… does that not smell distinctly Haimischi to you? So surely if there was fish in the ice-cream they would not have spelt it “Phish”, but would have called it Geffilta or maybe even Lox (Hmmmmm I think I have an idea for “Lox on the Rocks”). Plus take a good look at these men, and despite the knowledge that they are successful business men, Jewish business men, they also look like the kinda guys who in their day used to enjoy a puff or two… which I suspect is where they came up with the idea for the flavour “Phish Food”. Ben and Jerry were at a PHISH concert, getting high, and decided that they needed the mother of all munchies to satisfy their craving… off they went throwing together chocolate ice-cream, gooey marshmallow, caramel, and fudge (which they in their stoned state decided to make into the shape of a fish just for a laugh) and so created the greatest ice-cream ever made… Phish Food!

Yeah those of you who did not know Phish was a jam band and thought it was me just spelling Fish funny are feeling pretty stupid right about now...

Anyway, since the day of its creation, Students have huddled together late at night after long smoking sessions, or during a movie, or even in between class to eat this wonder placed on our earth… I still remember the first time I experienced the heavenly fusion of gooey marshmallow and smooth caramel sliding down my throat on a wave of chocolate… There is nothing in the world that tastes or feels as good! Not that I eat ice-cream very often, but when I do, I know what I want, Chunky Monkey, Dulce de Leche and the rest just do not cut it for me! I want my Phish Food!!

So yesterday I decided to quit it with the passive aggressive, staring longingly at the Ben & Jerry’s freezer section, and start taking action. I wrote a letter to Ben & Jerry’s in Israel:

From: Channah Graham [mailto:littlemissgraham@hotmail.com]
Sent: Monday, August 28, 2006 3:01pm
To: Inbal office@benjerry.co.il
Subject: BRING PHISH FOOD TO THE HOLY LAND!
Importance: High
Dear Ben and Jerry of Israel,
I have searched everywhere in Israel for the flavor Phish Food... I cannot understand why we don't already have the flavor available in Israel... most of the Phish band are Jewish afterall!
Please can you help fullfil a wish and bring Phish Food to the Holy Land...
thank you

Much to my suprise, I arrived in to work today to find Inbal HaRosh from Ben & Jerry's Israel had responded...

hi there,
fish food were in israel a few years back but on a stick
and then they stop making it
may be it will be here again in the future
have a nice day
inbal harosh

Well that explains it! I mean Phish Food was never meant to be on a stick! Plus there is a glimmer of hope, that maybe one day in the future they will bring it back again, only this time in tub form. All in all I was feeling pretty pleased with myself.
But not pleased enough to just sit back an rest on my laurels!

So I am writing this blog, in the hope that I may have turned your taste buds on enough that you will stand with me and appeal to the Ben and Jerry of Israel to bring our most favourite flavour to Israel! It doesn’t matter if you have never tried this flavour before… just read back through this blog, and imagine… It doesn’t matter if you do not live in Israel… we appreciate support wherever it may come from. Please cut and paste the following text to office@benjerry.co.il (Please CC me as well littlemissgraham@hotmail.com… I want to keep track of this) and join the Bring Phish Food to the Holy Land Campaign:

Dear Ben and Jerry of Israel,

We have one wish, one hope, and one dream and that is to bring Phish Food to the Holy Land.

Please join your fellow Israeli’s and help bring Phish Food back to the Jewish Homeland where it belongs. Not in a stick and not in fat free or yoghurt variety, but as pure and as wonderful as the day it was created in a big tub!

We are sending this petition to you in the hope that by NEXT YEAR WE WILL HAVE PHISH FOOD!

Thank you
THE BRING PHISH FOOD BACK TO THE HOLY LAND CAMPAIGNERS!!!

Posted by channahboo at 8:09 am

ummmm hate to say it but it was never my favourite-and was v annoying when it was the flavor everyone had...just not a chocolate ice cream fan (although did have fun picking out the little fish) give me cookie dough dynamo anyday!

I have to agree with eli on this one...