Last night in an effort to mix my workout and friends in one big melting pot of alcohol-free sociability, I went with a couple of friends to my first yoga class. As is unfortunately usual for me, I was running somewhat late, so after speed walking down Dizengoff to Bazel Street, I arrived already sweating and feeling a little out of my depth when the yoga instructor came to meet me and give me a little intro into my first class. I was relieved when he opened his mouth to find that not only was he really lovely and welcoming, but he was also 100% English spoken, well it was going to be hard enough to keep up with all the “lotus flower” talk in English, never mind in Hebrew!

I was concerned that I would not be able to get into, as in focus on the class, that I would be so concerned about falling flat on my face that I would end up… well flat on my face, and feeling like a fool. But this was just not the case. Firstly the years of going to gymnastic classes, had finally paid off! I was actually a lot more flexible than I had ever given myself credit for, and found that a lot of the poses were totally achievable, although when it came to the putting the knees behind the ears I decided to pass… well there is always room for improvement. Plus I have always had a thing about sweating. Being someone who sweats easily (I know I am sorry), I was perturbed to find that the room was not freezing cold to accommodate the sweaters in the room (the teacher included). However as the class went on I began to enjoy the feeling of sweat dripping down my body, through the crease in my neck, down through my cleavage as I stood arms stretched above my head, and then flowing back down my neck and along my chin to my mouth as I bent down to the ground. Yeah I know it sounds pretty gross, but in the moment there was something so pure and sensual about the whole experience. 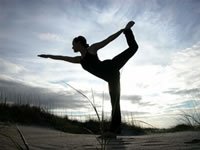 My preconceptions of yoga had always been based on the kind of people who were really into yoga, this includes my good friend Elana… they always seemed a little spaced out… not ‘normal’… most probably on some drug or other. Now however, I see that yoga itself is pretty much a drug. Apologies in advance for sounding like a total hippie! I found that the more I became in tune with my breathing, and how my body was feeling, the more everything else just disappeared, even the people around me, even the room… I was on a hilltop in India while children in white danced around me plinking little finger cymbals together, while an elephant stood nearby with incense coming from incense holders attached to the brightly coloured rigging on his body. Don’t get me wrong, when everyone was breathing deeply in to “OMMMMMMMMMMMMMMMMMMMMMM” out, I did have to control the urge to burst into laughter, but once my mind was firmly in the ‘Zen’, there was no turning back. The class came to an end with the entire room lying on their mats in darkness breathing in and out. The assistant at this point came around and one by one but her hands on our shoulders pressing them into the ground, and then putting her hands behind our necks. I have never enjoyed being touched so much in my life! Ok, maybe a slight exaggeration, but whereas I kept my mouth firmly shut and concentrated on my breathing, the people either side of me had no such manner to hold back the sounds of utter pleasure after this! I was jealous!

After an hour and a half my body was feeling so relaxed, so relieved, so rejuvenated that I pretty much bounced back to my apartment. When I walked in Nooman looked at me somewhat bemused and said with a big grin on his face;

Nooman: Where have you been? And who have you been with!
Me: I was at yoga with the girls…
Nooman: Ha ha so that’s why you are glowing!!

So for all those people who I spoke to last week who were complaining about being sexually frustrated, ok that was pretty much everyone, my advice to you is go out and find your local yoga class… It may not be a permanent solution, but it is certainly a good short term fix!

LOL! O.K...Sign me up, if im not haviong sex I should be having yoga!

i want to take bikram yoga classes. get really hot and really sweaty.

i have been thinking of taking yoga myself. i am not sure why i have not done it yet...i think because i'm afraid that people will stare and all the crap. just paranoid about my physical size.in the back of my mind, i think of yoga as something skinny waff like girls do, even though i know it is not that way. i have a couple of friends who rave about it. i do need some stress management. i have such a short fuse. maybe it would help w/ that.

Yes it does ranting! But be warned that for roughly 3 days after you first yoga class you fuse will be shortened even further due to not being able to move!

dolce and israluv... seriously girls! Thursday night could not come sooner could it! Lucky me to have my apartment all to myself ;)

While Nooman's away the ladies are going to... well we'll sort you girls out!

whatever about the yoga....but yey to thurs night out!!! do I get Noomans bed???

erm...elif...FYI
If you want NOOMAN you're gonna have to fight for him! MEEEEEYOOW!

Noooman is away isnt he? (did i misunderstand something?)

LOL! I missed that bit where he would be away. Well... you can have his bed, but don't get to excited ... If it were anything else I would have to HISSSSSSSS at ya :P

woah!!! is there a hint of katamonster in the Dolce Vita?