Lily of the flood 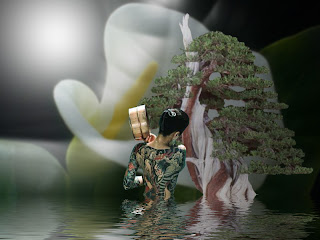 Last week seemed to go on for a century and I was struggling to keep my head above the water when suddenly Thursday appeared. I had plans of Tika Masala, Dorothy Gale and a whole weekend hanging with the Maximus to look forward to, and how I needed it! Work has had my head spinning around and yet I have been standing still for almost two years, so the dizziness churns my stomach all the more and I am left feeling light headed and wobbly on my feet. Why as children did we spin and spin around? I now understand. Boredom.

I have to find a new response to the old question “How you doing?” “All good”, is also pretty boring. But I guess when nothing is bad, but nothing is particularly great, you are left with Parve. On top of that I feel myself loosing my voice more and more. I hear myself and I am bored. I find something interesting to say and I am shushed. I see me, age 5, shrinking in my big chair, under the faces of my family telling me not to be such a drama queen or that I remind them of Sarah Bernhardt. I know that in part neither insult nor intentional injury, and I do not repeat this to feel pity, a fool can pity themselves. I say it to point out a pattern that has encroached upon my life without me realizing it. Have I really taken on the same role among my friends as I have within my family?

All these things swirl around my mind as I lay down for my Thursday afternoon nap before a long and rewarding night ahead. After I awoke I attempted to shower and change for my evening, only to find that the bath would not drain and was full of dirty water. I tried to unclog the drain, but no use. With only half an hour left before I was supposed to meet the girls out I began to stress before regaining my head and deciding that the bath could wait and proceeded to whore wash myself over the sink.

My hair washed and feeling relieved I turned to walk out of the bathroom only to be greeted by water gushing out of the old unused shower and under the door. I was shocked at the amount of water… the noise sounded like a river running down my hallway and I leapt to my feet to try and soak up as much as possible before anything of worth was damaged.

It was not quite too late. The water was using the Twins old technique of when there is only one person to deal with you, separate into two different directions. So I was stood in my hallway naked, because I used my towel to try and stop the water going out of the bathroom, faced with the decision of saving my room or Nooman’s room. I leapt into action throwing on some clothes in case anyone came to my rescue only to find me dancing around in my birthday suit. I then ran, as fast as I could in 3 inches of water without falling on my ass, and grabbed the mop and began the work of saving Nooman’s computer. The water was already halfway to its target, soaking his checkbook and papers left on the floor, taking a bite out of the rug before deciding to snake under the bed, covering his shoes and out towards his study and his massive collection of discs and his new computer. I tried to save as much as I could as I ran towards the head of the flood to stop it in its tracks. As I did I called Nooman… COME HOME NOW!!! YOUR ROOM IS UNDER ATTACK! WE HAVE A FLOOD!!!

Three hours later; after forcing my landlord to do something for the money we pay him each month; crying; taking out all the water; crying; manually moping up the water that had got into the basement; crying; helping the plumber release more water; crying; clearing up more water… Nooman and I eventually collapsed, our Thursday evening sodden. Feeling too sorry for ourselves to give sympathy to the other, Nooman went to bed, leaving me to cry some more alone. A pathetic sight until a friend came baring the curry I had not been able to eat and another with Vodka to drown out the flood and dry away my tears. “You cannot end your bad day this way. We are going out.”

After a night of dancing, drinking and hiding from slimy Israelis, I collapsed into my bed. Unable to sleep I thought about the evening. At least the apartment was clean. A year of dirt never touched under certain beds was washed away and I began to think of the symbolic relevance of the flood. Like for Noah the flood washed away the dirt of our apartment and so too I felt it washed away the stale cobwebs for me, leaving behind a blank canvas to start again. What do I do with this canvas? I think I will paint a picture of what I would like my life to be, but without the high expectations. Instead I will step away in order to come back and be able to look fresh-faced and appreciate the wonderful family, friends and life I have around me.

I have been thinking… If you were to change your name you would be a Lily to me… The Lily is not a dramatic flower like the rose, the Lily is not overly dramatic although it has the ability to be so… It does not demand attention… Its symbolism is both good and evil… it has both capabilities… but for the most part it prefers to not stand out like the rose… It is funny how you fit into the same mould as you do within your family… The one capable of being dramatic, yet never demanding attention when none is willingly give… And then there is Lily Allen.
Posted by channahboo at 3:14 pm